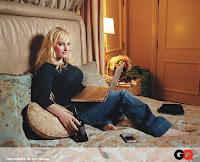 Wow, Meghan McCain! So you’ve starter the long-awaited take-down of that other pillar of the Republican party: Ann Coulter. Well, it’s working! Your new blog post on the Daily Beast has everyone gawking (and Gawkered) in amazement. Now we just await Coulter’s response.

Coulter could be the poster woman for the most extreme side of the Republican Party. And in some ways I could be the poster woman for the opposite. I consider myself a progressive Republican, but here is what I don’t get about Coulter: Is she for real or not? Are some of her statements just gimmicks to gain publicity for her books or does she actually believe the things she says? Does she really believe all Jewish people should be “perfected” and become Christians? And what was she thinking when she said Hillary Clinton was more conservative than my father during the last election? If you truly have the GOP’s best interests at heart, how can you possibly justify telling an audience of millions that a Democrat would be a better leader than the Republican presidential candidate? (I asked Ann for comment on this column, including many of the above questions, but she did not answer my request.)

I am not suggesting that extreme conservatism wasn’t once popular, nor am I suggesting I should in any way be any kind of voice for the party. I have been a Republican for less than a year. Still, even after losing the election, I find myself more drawn to GOP ideals and wanting to fight for the party’s resurgence. And if figureheads like Ann Coulter are turning me off, then they are definitely turning off other members of my generation as well. She does appeal to the most extreme members of the Republican Party-but they are dying off, becoming less and less relevant to the party structure as a whole. I think most people my age are like me in that we all don’t believe in every single ideal of each party specifically. The GOP should be happy to have any young supporters whatsoever, even if they do digress some from traditional Republican thinking.

Girls! Girls! Oh my God, this is going to be scarier than Jo and Blair in a pool of heated mud, or else a musical version of Atlas Shrugged. Read the comments after McCain’s piece to enjoy the scrum within the scrum.