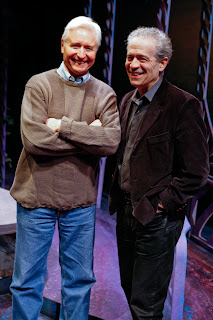 Major news in the Off-Broadway world just over the transom:

J.R. Sullivan (at left in the photo) has been named the new Artistic Director of The Pearl Theatre Company, it was announced today by the Board of Trustees. Sullivan will succeed Shepard Sobel, The Pearl’s founding artistic director, and will assume his new position on Aug. 1, 2009.

Sullivan, who is based in New York City, has directed five productions for The Pearl, including its current production of Twelfth Night, which runs through February 22. He is currently an associate artistic director of the Utah Shakespearean Festival, where he has directed productions of Art, King Lear, Merchant of Venice, Hamlet and Stones in His Pockets, among others. Sullivan also directed As You Like It for the Oregon Shakespeare Festival (OSF) this season, as well as Room Service for the OSF’S 2005 season. In addition, he has directed for American Players Theatre, Steppenwolf Theatre Company, Northlight and Studio Theatre in Washington D.C., Delaware Theatre Company, Madison Rep, Theatre X, and Milwaukee Chamber Theatre. Sullivan founded the New American Theater in Rockford, Illinois in 1972, and served as producing artistic director until 1994.

“We are delighted that we have found someone with Jim Sullivan’s talent, experience and dedication to classical theater to succeed Shepard Sobel, our founding artistic director. Shep brought The Pearl and its Resident Acting Company to life 25 years ago and, together with his wife, actress Joanne Camp, has carefully nurtured it into the pre-eminent classical repertory theater in New York City,” said Allison Cooke Kellogg, Chair of The Pearl’s Board of Trustees. “We are profoundly grateful to Shep and Joanne for their vision, dedication and fortitude in building The Pearl and look forward to working with Jim to bring The Pearl’s legacy to new audiences.”

“The Pearl will remain dedicated to classic works, works that never fail to surprise and even astonish by their enduring power to excite thought, compel ideas, and stir emotion,” said Sullivan. “I am thrilled by the opportunity and happily anticipate beginning work for the 2009-2010 Season.”

Sobel and Camp, The Pearl’s associate director and founding member of its Resident Acting Company, established The Pearl in 1984. They will be moving to Albuquerque, New Mexico, to be closer to family and will continue their work in the theater as freelancers.

“It has been our goal to nurture the finest resident company of actors in America,” said Sobel. “We founded The Pearl because we felt a great need in New York for an acting company capable of addressing the myriad demands of a classical repertory. Because of our enthusiastic confidence in Jim, we are able to leave with full and happy hearts,” said Mr. Sobel.

The Pearl Theatre Company is an OBIE award-winning Off-Broadway theatre that has produced five mainstage productions annually since its founding, for a total of 123 classical plays. Of these, 49 were originally written in another language. The Pearl Theatre Company has presented world premiere productions of 19 new translations, 14 of which The Pearl commissioned to be added to the existing canon. The Pearl also boasts a resident acting company – a rarity in NYC – which currently has 11 members.

Prior to founding The Pearl, Sobel was a freelance director in New York City and Washington, D.C. He also taught English and theatre at high schools in Canandaigua, New York, and Annandale, Virginia, and at a state hospital for the severely emotionally disturbed in Florida. He spent three seasons as an actor with the Folger Shakespeare Theatre.