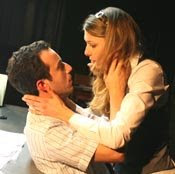 Ranging from the comic to the cringe-worthy, these five one-acts by Itamar Moses suit the Flea Theater’s downstairs venue because its wide, shallow space renders the fourth wall into a silly convention – like the much of the piece itself.

Love/Stories (or But You Will Get Used to It) opens with a long voiceover from Moses asking for cell phones off and other pre-show admonishments; he adds a heaping teaspoon of pithy comments to ease us into the metatheatrics to come. Then Chemistry Read – about a director (Maren Langdon) and a playwright (Felipe Bonilla) auditioning a bad actor (John Russo) and a good actor (Michael Micalizzi) with a reader (Laurel Holland) – begins. It’s a piece without direct address but is staged by director Michelle Tattenbaum so the actors are in the audience’s face. It’s amuse bouche theatre with a light taste.

Temping, play two, ramps up the actor-audience symbiosis. A woman (Langdon) sits at a desk against the railing before the first row of seats. Adjacent to her desk is another desk with a man (Micalizzi) loudly stapling and stamping papers. On the phone, she delivers a perceptive monologue representing her side of a conversation with an ex that devolves into post-relationship drama. The man reacts drolly, typically shuffling papers to show his compassion for or impatience with her hysterics. The call ends. She yells at the man, then apologizes, then kisses him. All of this two feet from the front row, perhaps six from the rear row. Well done.

But here Moses’ writing goes from a nice mix of head and heart into nutty navel-gazing. In Authorial Intent, a newly cohabitating couple (Holland and Micalizzi) breaks up. Instead of the scene ending, however, they relive the scene moment by moment, declaring to us which lines, looks, or blocking elements constituted a “performative instrument” or “formal device.” When this ends, we discover the actors were playing actors in a play within the play. Then the male actor hits on the female.

In play four, Szinhaz, an edgy Russian director (Bonilla) is interviewed by one of his actors (Langdon) and reveals some dark personal secrets. Here too Langdon must dissolve into tears, which she does nicely, but the scene’s point is fuzzy. Indeed, despite Bonilla’s grand Russian accent, we’re left more alienated than involved.

And piece five, Untitled Short Play, is psychobabbling twaddle. All night long, a reader (Russo) – clearly Moses’ stand-in – has appeared at the start and end of each piece, announcing their titles and often stage directions. Now he asks us to watch a man and woman in chairs, rigid in physical and facial expressions, as he tells us about everything they’re thinking and feeling. Then he slides into chatter about the difficulties of being a writer – a pity party for one.

All the actors belong to the Bats, the Flea’s in-house ensemble, so they’re used to keeping character in check with the audience so near. I’m always fascinated by them, and these performers are especially loose and lovely. Also nice is Tattenbaum’s work, which allows the plays to breathe. The trouble is that Moses is gasping for air.