How wonderful this celebration of Marian Seldes will be. Bravo to the Vineyard! 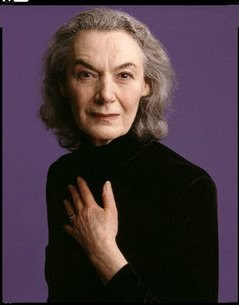 Tony Award-winners Nathan Lane and Anika Noni Rose are set to participant in The Vineyard Theatre’s star-studded tribute to Tony Award-winning actress Marian Seldes and The Union Square Partnership at the theatre’s annual gala on Monday, February 9th at 6 PM at The Rainbow Room (30 Rockefeller Plaza, 65th floor) in Manhattan.

The Gala, which will benefit the Vineyard Theatre, one of the nation’s leading theatres devoted to producing new works, will include salutations to Ms. Seldes — who originated her role in Edward Albee’s Pulitzer Prize-winning play THREE TALL WOMEN in 1993 at The Vineyard — and celebrate its theme of community spirit and neighborhood involvement by also honoring The Union Square Partnership.

Nathan Lane, who will host the evening, starred opposite Ms. Seldes Off-Broadway in Terrence McNally’s DEDICATION, OR THE STUFF OF DREAMS. Mr. Lane is best-known for his Tony Award-winning performances in THE PRODUCERS, A FUNNY THING HAPPENED ON THE WAY TO THE FORUM, and LOVE! VALOUR! COMPASSION!. Anika Noni Rose, who received an Obie Award for her work in the musical ELI’S COMIN’ at The Vineyard, won a Tony Award for her performance in CAROLINE, OR CHANGE, and co-starred with Beyonce Knowles and Jennifer Hudson in the film version of “Dreamgirls,” is set to perform.

Other notable participants include actresses Lucie Arnaz and Marcia Gay Harden, Patricia Clarkson, [title of show] co-stars Hunter Bell and Jeff Bowen, playwrights Craig Lucas and Terrence McNally, actresses McKenzie Frey, Angela Grovey and Rebecca Naomi Jones as “The Fates 3” from The Vineyard’s recent hit play WIG OUT!, and others to be announced.

The beloved Marian Seldes, whose career has spanned six decades and has included noted stage, film, radio and television performances, made her Broadway debut in 1948 in a production of MEDEA and was most recently seen on Broadway opposite Angela Lansbury in DEUCE. Ms. Seldes has earned five Tony Award nominations, winning in 1967 for her performance in Edward Albee’s A DELICATE BALANCE. She made her Vineyard debut in 1993 in the theatre’s sold-out production of Mr. Albee’s THREE TALL WOMEN, which transferred to the Promenade Theatre, where the play ran Off-Broadway for three years, prior to a successful national tour and an engagement in the West End.

The Vineyard opened its current season with the critically acclaimed world-premiere of Tarell Alvin McCraney’s play WIG OUT! which extended twice, playing to packed houses and breaking box office records that surpassed such past hits as [title of show] and AVENUE Q. With previews set to begin February 3, Vineyard Theatre will present the New York premiere of The Civilians’ newest work, THIS BEAUTIFUL CITY, in a co-production with Los Angeles’ Center Theatre Group.

Under the artistic leadership of Douglas Aibel, Vineyard Theatre has presented some of the most provocative and original new plays and musicals written for the stage in the past 27 years. The Vineyard received its first Tony Awards with AVENUE Q, winner of three 2004 Tony Awards, including Best Musical. Other productions of note at The Vineyard include two Pulitzer Prize-winners, Edward Albee’s THREE TALL WOMEN and Paula Vogel’s HOW I LEARNED TO DRIVE; Craig Lucas’ THE DYING GAUL, Becky Mode’s FULLY COMMITTED, AFTER ASHLEY by Gina Gionfriddo, Julia Cho’s THE PIANO TEACHER, the musical THE SLUG BEARERS OF KAYROL ISLAND by Ben Katchor and Mark Mulcahy, and Christopher Shinn’s WHERE DO WE LIVE; as well as premieres of new works by Nicky Silver, Kirsten Childs, Polly Pen, Cornelius Eady and Doug Wright. The Vineyard’s hit musical [TITLE OF SHOW] received three OBIE awards for its creators, Jeff Bowen and Hunter Bell, and its director, Michael Berresse, in 2006, transferring to Broadway this past summer.