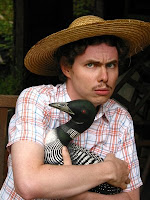 Major congratulations to Mac Rogers on the return of Universal Robots to the New York City theatrical boards. Read the release below and get your collective heinies there, please. (That’s including me, people!)
Story continues below.

“The year is 2009. The last human being died in 1971. Each year we gather together to tell the story that we never ever forget.”

The Great War has just ended. Czechoslovakia is a republic with an elected president and a thriving artistic community that includes celebrated playwright Karel Capek. But history cracks wide open when a young woman walks into Karel’s life with a strange mannequin in a wheelchair… a mannequin that gets up and moves all by itself.

A science fiction thriller, love story, political allegory, redemptive tragedy and fast-paced entertainment, Universal Robots offers a compelling, alternate history of the Twentieth Century, starting with the invention of the robot in 1921 and chronicling the extraordinary consequences of that invention, which changes the world forever.

Mac Rogers freely adapted Czech playwright Karel Capek’s seminal 1921 play R.U.R., which introduced the word “robot” to the world. Universal Robots departs significantly from Capek’s script, offering a meaty and riveting story of war, love, faith, technology and the power of art to change the world, for both good and ill.

Scheduled February 12 through March 7, 2009, Universal Robots performs at Manhattan Theatre Source (177 MacDougal Street, between Waverly Place and West 8th Street, Subway: A/C/E or B/D/F/V to West 4th) Wednesday through Saturday at 7:30 pm. Tickets are $18. Tickets may be purchased in advance at www.theatermania.com or (212) 352-3101. For additional information, visit www.universalrobots.net.

Open since 2000, Manhattan Theatre Source (the Source) is an arts service and producing organization located in the heart of Greenwich Village. Recently named “one of the top five Off-Off Broadway theaters” by New York magazine, the Source launched Obie Award-winning [title of show], which recently completed its Broadway run, and was home to the world premieres of Coronado by Dennis Lehane (Mystic River) and Richard Vetere’s Machiavelli. For more information, visit www.theatresource.org.

Mac Rogers (Playwright) was awarded the FringeNYC’s Outstanding Playwrighting Award in 2007 for Hail Satan. He wrote the book for 2005 FringeNYC’s Outstanding Musical winner Fleet Week: The Musical. Rogers’s plays have been produced at HERE Arts Center, The Lucille Lortel Theatre, and Manhattan Theatre Source, and his play The Second String is published by Playscripts, Inc. His short play Happening to Your Body, produced by the Estrogenius Festival, earned praise from The New York Times [“The premise is clever. (Rod Serling would approve of how intriguingly the situation is revealed.) And the language is memorable.”]

Rosemary Andress (Director) is a New York-based director with a passion for original work. She directed The A-Train Plays for The Neighborhood Playhouse, Dear Prudence at the Rattlestick Playwrights Theater, Abel for the Soho Playhouse and True and Solid Ground for the Soho Repertory Theatre, all premieres of new works. She has also directed for the American Theatre of Actors, Summer Play Festival, Expanded Arts, the New York Theatre Workshop and the Harlem Arts Festival.

Carey Perloff - June 10, 2020 2
By the time our theaters reopen, which artists will be left standing? Let us revisit the ancient notion of the acting company.

Elizabeth Burke - July 5, 2020 0
Either the ignoramus president was told the intelligence and did nothing about it or no one on his staff told him. Which sounds worse?

Kushner and the Slim Suit Crowd Will Kill Us All