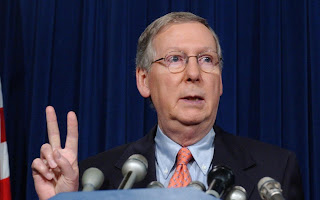 This kind of stuff just makes me angry. Today the Washington Post reports that even before Obama’s inauguration, the Senate Minority Leader, Mitch McConnell, is pledging to be a total obstructionist regarding the new president’s huge stimulus package.

Like many Republicans, McConnell is content — even happy — to see the American people suffer. Let them starve, let them hurt, let them be jobless, let them be hopeless. Oh, but please volunteer for the armed services so we can send you to a war fought on false, misleading pretenses.

Here are the first few graphs of the story:

“As of right now, Americans are left with more questions than answers about this unprecedented government spending, and I believe the taxpayers deserve to know a lot more about where it will be spent before we consider passing it,” McConnell said in a statement, which will be publicly issued later today.

Obama’s advisers and congressional Democrats have been huddling in the Capitol trying to craft a massive stimulus plan that could cost anywhere from $675 billion to $850 billion, while some economists are pushing for a total package worth more than $1 trillion.

McConnell — the most powerful Republican in Washington, based on the filibuster-proof level of 41 GOP Senate seats — called for many congressional hearings on the stimulus plan and some undetermined safeguards to assure the money is being spent wisely.

Clearly what McConnell is doing is sending a warning shot across Obama’s bow — to make sure the new president understands that he must negotiate with the other side. But I think there are far more constructive ways to make his point known.

I also find these comments on Politico.com, in response to this story, very interesting. You can read the comments here.

Bottom line: It was 25 years of Republican dominance that fiscally decimated my nation. People like McConnell should be taken out in the back somewhere and given a shot of real patriotism. The new president is trying to save the nation. Doesn’t anyone realize that? It’s that serious, people.

And if you don’t believe me, let’s talk about something truly apocalyptic: a Russian professor, according to the Wall Street Journal, who is considered neither a wacko nor a fatalist, is openly predicting the end of the USA in 2010. It’s such a bizarre story. Here are the first few graphs of that piece:

MOSCOW — For a decade, Russian academic Igor Panarin has been predicting the U.S. will fall apart in 2010. For most of that time, he admits, few took his argument — that an economic and moral collapse will trigger a civil war and the eventual breakup of the U.S. — very seriously. Now he’s found an eager audience: Russian state media.

In recent weeks, he’s been interviewed as much as twice a day about his predictions. “It’s a record,” says Prof. Panarin. “But I think the attention is going to grow even stronger.”

Prof. Panarin, 50 years old, is not a fringe figure. A former KGB analyst, he is dean of the Russian Foreign Ministry’s academy for future diplomats. He is invited to Kremlin receptions, lectures students, publishes books, and appears in the media as an expert on U.S.-Russia relations.

But it’s his bleak forecast for the U.S. that is music to the ears of the Kremlin, which in recent years has blamed Washington for everything from instability in the Middle East to the global financial crisis. Mr. Panarin’s views also fit neatly with the Kremlin’s narrative that Russia is returning to its rightful place on the world stage after the weakness of the 1990s, when many feared that the country would go economically and politically bankrupt and break into separate territories.

Of course this fellow has his own agenda, and no, I don’t believe it. But the stakes are terribly high, aren’t they? And all McConnell knows how to do is to play politics with the nation — with the lives of the American people.

Elizabeth Burke - January 8, 2020 0
Thanks to Trump, our planet is set to turn into a cataclysmic, apocalyptic political and military disaster. Happy 2020! And welcome to our weekly podcast.