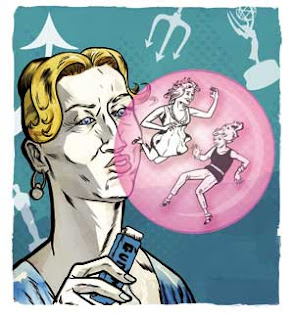 I wrote this piece for the New York Press, looking at the New York stage debut of Grace Gummer, actress-daughter of Meryl Streep, and Grace’s sister Mamie, who is already a New York theatre mainstay. It’s a piece about being celebrity spawn, about how celebrity spawn does or does not use or tease the press, and about what a Gummer girl is really all about.

Since Grace Gummer was not made available to me to interview, as had originally been suggested, this is what I wrote instead. Thank you, Gay Talese.

Grace and Mamie Gummer are actresses. Were it not for a mind-spinning quirk of heredity, however, they would be indistinguishable from all the other under-30 New York City women working through the thicket of the theater, yearning to win the role that will catapult them toward a film and TV career and the fiscal security all actors crave. Grace and Mamie’s role model is their mother, Meryl Streep; they are the middle children of Streep and her husband, sculptor Don Gummer. Elder brother Henry is 29. Younger sister Louisa is 17.

All Streep’s children bear strong resemblances to their mother. But for Mamie and Grace it’s eerie, as if fate decreed it insufficient for Streep to merely cast her inevitable shadow across the lives of her progeny but instead anoint them to stride through the world unmistakably aware of their mother’s pate as their own: Those elliptic heads, aquiline noses and luminescent, Streepy eyes; those thin, upturned mouths. On and off stage, their faces slide easily into mirth and mischief. Or they can also launch a don’t-come-too-close shot across the bow of anyone unvetted who might approach. When Grace takes the stage in The Sexual Neuroses of our Parents this week, it will get even more uncomfortable-and intriguing-as audiences gawk at the celebrity spawn.