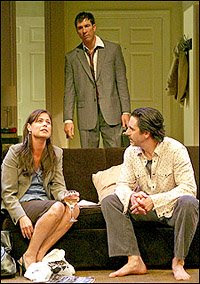 Oh, Nicky Silver, I seriously wish I could have given a better review to your new play at Playwrights Horizons, Three Changes, than the one I had to write.

But in my Back Stage review, I wrote:

The title of Nicky Silver’s new play is Three Changes, about which one thinks, Gee, only three? If there had been more changes in the writing process, might this seriocomic misfire have worked?

As in the best of Silver’s work, Three Changes benefits from the playwright’s topical, often mordant humor. It’s also consistent with his interest in anatomizing families, including one emotionally quiescent female character. Staged with dispatch by Wilson Milam, the play is nonetheless thematically diffuse.

Elizabeth Burke - February 25, 2020 0
And if you've still never heard the comb story of Amy Klobuchar (where have you been?), now is seriously the moment.