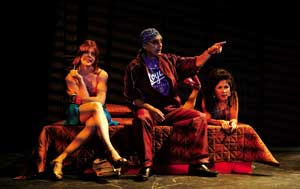 Let’s say a major American playwright wrote a new work explicitly supporting or justifying the U.S. invasion of Iraq, even at this late date. Most likely he or she would receive from the left (led by the theater’s liberal lions and powerbrokers, no doubt) something tantamount to the fatwa bestowed on Salman Rushdie after the publication of The Satanic Verses. Still, for variety’s sake, why not write such a play-something attempting to spit-shine George W. Bush’s evil folly?

No major American dramatist, so far as I know, has obliged my idea as of yet. Instead, what we have witnessed this decade is the slow, steady accretion of new antiwar plays-the resurgence of a genre that last peaked after the grisly, soul-searching end of the Vietnam War. While such plays can and usually are barnburners, the problem comes in when they preach to the choir, reaffirming what audiences believe as opposed to challenging the reactionary viewpoint. Beast, a new play by Michael Weller (a major playwright since his Moonchildren opened on Broadway in 1972), is a case in point.

Elizabeth Burke - January 25, 2020 0
Have the powers of the Presidency reached a tipping point or do we simply have a incompetent criminal in the White House?